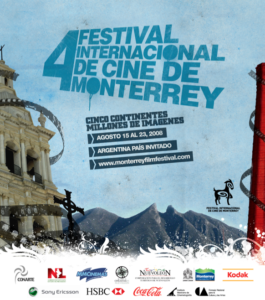 One of the most outstanding aspects of this edition was its first International Screenwriters Encounter, organized together with the Austin Film Festival. Its 694 enthusiastic attendees had the opportunity of meeting and learning from outstanding screenwriters such as Daniel Petrie, Herschel Weingrod, Paula Markovitch, D.B. Sweeney, Alex Smith, Paz Alicia Garciadiego, Xavier Baig, Thibault Staib, John Dickie , Cai Shangjun and Pavel Jech.

This year the Film Industry Day was also organized for the first time, with the collaboration of Kodak, New Art Digital, Imagyx, Studio Mart and Cinergia Films. The event included panels, conferences and workshops, with the objective of contributing, through the exchange of ideas, to the development of the region’s audiovisual industry. In this first edition, its almost 500 attendees were proof of the great interest there is in the state of Nuevo León in this industry’s growth.

Argentina, as guest country, not only brought a very interesting selection of its feature and short films, but also showcased through the independent production company Cine Ojo the great talent this country has to offer in the documentary films production. Within the celebration of Argentina as guest country, the Festival recognized one of this country’s most outstanding performers, actress Cecilia Roth, who received a Cabrito de Plata as an international Career Achievement Tribute.

The American actor Tommy Lee Jones, and Mexican actor Héctor Bonilla, also received the Cabrito de Plata during the Festival as recognition to their admirable and extensive careers in their respective countries.

The American film “Be Kind Rewind”, directed by Michel Gondry and with Jack Black in the leading role, was screened during the inauguration of this 4th edition of the Monterrey IFF.

Mexico from North to South in competition