From August 21 thru 29, 28,045 people attended the Festival’s several venues to witness the new proposals from local, national and international filmmakers. 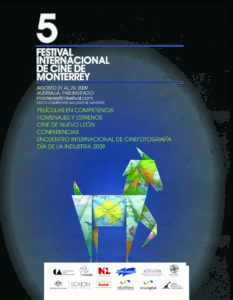 A total of 194 films were selected and screened, from 2,424 films of 117 different countries that were received at the Monterrey IFF’s headquarters.

The emotional story about a non-conventional friendship welcomed the attendees to the 5th edition of the Monterrey International Film Festival with the animated short film “Mary and Max” from director Adam Ellion. The film inaugurated the event in which Australia was the honored guest country.

This year, besides organizing the Film Industry Day for the second time, with the theme “Pictures for sale (and filmmakers too)”, the Festival celebrated the first International Cinematographers Encounter, with the support of the Filmmakers Association of Nuevo León and the Mexican Association of Cinematographers. A total of 855 attendees gathered to listen to the keynote conference by famous Australian cinematographer Peter James, and attend the workshops and lectures offered by specialists in this area such as Serguéi Saldívar Tanaka, Henner Hoffmann, Emiliano Villanueva and Peter Majtan.

Mexico from North to South in competition