For its ninth edition, the Monterrey International Film Festival decided to invite our closest neighbor to our city, the United States, and offer Nuevo León’s film lovers a look of what this country’s filmmakers have to offer outside of Hollywood’s productions. 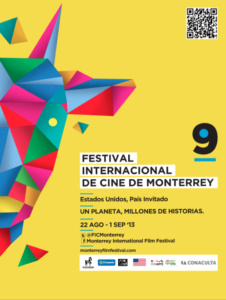 The fiction drama “Upstream Color”, written, directed, produced, edited and performed by American Shane Carruth, was selected to embellish the Festival’s inauguration gala. The Festival took place from August 22 thru September 1st, 2013, and was attended by 17,359 people.

One year away from celebrating its first decade, the Monterrey IFF looked to broaden its positive impact on society and together with its regular activities, such as the International Animation Encounter and Film Industry Day, this year it partnered with the organization Enlaces Con Tacto, A.C. to offer a stop motion animation workshop for girls from the De La Armonía children’s home, who had the opportunity of creating their own short films and screening them in the Festival’s program.

This year a special effort was also made to take the Monterrey IFF to marginalized communities where some of the films from the official selection were screened. A contest was also organized under the name Fotogramas de Ayuda, which awarded winners support to produce a video to help women who are victims of violence, and to develop an individual video project. The year’s three Tributes stayed home. Two were handed to the great Mexican actor Ignacio López Tarso, who received the Cabrito de Plata for his Career Achievement, and the Cabrito de Cristal as a Icon of Mexican Cinema. The renowned actress Angélica Aragón was another Mexican honored by the 9th Monterrey IFF and also received the Cabrito de Cristal award.

Special Mention to Rain in the Eyes directed by Rita Basulto