Film after pandemic: Adapt or die 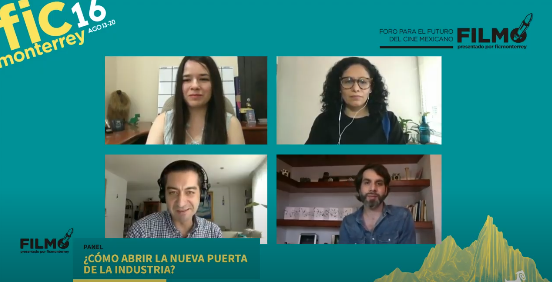 Film productions will have to reinvent to meet the challenges that the health crisis accelerated. According to specialists who participated in the FILMO forum at the Monterrey International Film Festival, the challenges are regarding the brake that their projects suffered, the budgetary restructuring that forces them the crisis, but also, to the new quality requirements that the platforms, as a new window of exposure claim.

«There is an increase between 15 and 30% of the budgets between tests you have to do, the gel, the masks», said Alejandra García, producer of “This is not Berlin” when she made it clear that as a producer she knows well that there is no budget that is sufficient for a film and less when you have to circumvent health requirements.

The talk led by the title «How to open the new door of the industry?» Also participating were Francisco Westendarp, Director of Industry Activities at the Los Cabos International Film Festival; Adriana Castillo, Manager of Institutional Relations EGEDA Mexico and Arturo González Alonso, CEO of the Art Kingdom as moderator indicated that there is an important debate for the platforms about what their bet will be to get the audience.

Tags: covid-19ficmonterreyMonterrey film festivalpandemic
Previous
Experimental film, a window to creativity
Next
Wave of films on the pandemic predicted